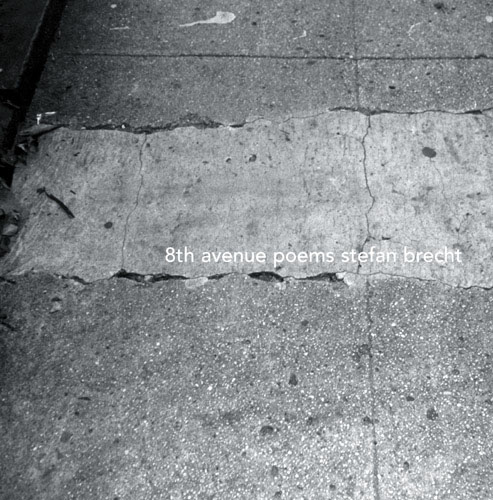 Brecht brings decades of cultural observation to NYC’s streets, missing neither harshness nor beauty, in a language bursting with the specific, punctuated by the lyric—a night city of desolation and courage he clearly loves, fetid and sublime.

Kenneth Bernard, author of The Man in the Stretcher

Stefan Brecht’s poems have the unforced urbanity of high art.  A flaneur of subtle penetrating insight, he remains ever open to the miraculous. His city—New York City—his “poet’s estate,” is bathed in “the morning star's ambiguous light,” in which every mote scintillates, throwing off shards of sadness, beauty and hope.

In Stefan Brecht’s ambitious epic poem, 8th Avenue, a sentient and transient city is discovered anew. Brecht, the adept explorer, documents days and nights from sunrise to dark, from summer to winter, from light to shadow; his 8th Avenue is the vortex of streaming lives on meandering streets.  Interior and skeletal moments are sometimes stilled, sometimes speeding across short and long lines of rigorous, incisive poetry. 8th Avenue offers a bird’s-eye and microscopic view of New York City that shouldn't be missed.

Stefan Brecht’s 8th Avenue is a remarkable set of poems. Its spare style, determined by the moving eye in the urban streetscape and informed by a wry wit and bittersweet attachment to the common life and people of Manhattan, brings to mind the Objectivist vision of Charles Reznikoff. And like Reznikoff, Brecht gives us moments of wisdom, dark and unadorned, in an offhand, casual fashion.  But this is also poetry that will suddenly veer into the abstractly philosophical and the socially analytic without missing a beat or losing the melody. Above all, it is uncompromising in its insistence that art face up to the way life is lived, along a pulsing artery of the greatest city in the world.

Stefan Brecht was born in Berlin, Germany, in 1924, and came to America in 1942. He was a doctor of philosophy and had been a teacher, a writer on theater, Stein and Goya, as well as a late-night actor. Mr. Brecht Passed away in early 2009.