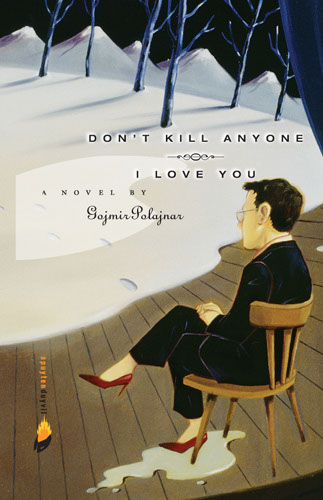 Don't Kill Anyone, I Love You

Translated from the Slovene by  Aaron Gillies

This rather sordid tale of AIDS, Ecstasy, bisexual promiscuity, hypocrisy, bureaucracy, and betrayal should help change the American image of Slovenia as a primitive backwater, but it could hardly be what the Ljubljana Chamber of Commerce had in mind...Polajnar may become something of a Balkan Irvine Welsh, and Don’t Kill Anyone, I Love You could find a niche audience, especially among younger gay and bisexual readers.

Don’t Kill by Emerging Slovenian writer Gojmir Polajnar is the kind of self-indulgent mess only a talented writer could produce.  Fragmented and plotless, the novel concerns a group of Slovenians—scientists, artists, a few barely distinguishable handsome young men—all connected through their sexual encounters.  Polajnar’s emphasis on fluidsexuality works: Straight sex segues into gay, rape into eroticism.  But his critiques of bureaucracies, such as the "top-secret" Cognitive Institute, fail as satire or anything else—though a visit to the Organization of Women Married to Homosexuals scores through comic understatement. What makes the novel so maddening is its squandered potential.  The author is capable of lovely descriptions of Slovenia's landscape and of composing sexual passages in a bracing style reminiscent of Milan Kundera.  But even in the sex scenes Polajnar neglects to reign in his metaphors, which are as various as they are unfortunate. The closest the novel comes to having a center is Dot, a quixotic chanteuse of ambiguous gender who makes for lively reading and suggests what Polajnar might one day achieve with a more disciplined approach.

Polajnar takes all of the social institutions—science, religion, the state—puts them in a vise, and twists. What emerges is a clever and compelling tale, full of music, theatre, and delicious sex. It’s like the writing George Orwell might have done if he hadn’t had that big stick up his ass.

D A Powell, author of Tea and Lunch

The novel Don’t Kill Anyone, I Love You by Gojmir Polajnar is one of the more openly gay fictions to have recently appeared in Slovenia.... it succeeds in presenting us with a stylised testimony of pain and longing...and a fractured glimpse of the universal human condition.

Ales Debeljak, author of The City and the Child

A real breath of fresh air on the Slovene novel scene. I suggest that you give yourself over to this first effort without hindrance. You might discover something about yourself that you never knew before.

Start with the poetic lyricism of a Mary Butts or Djuna Barnes, in which chic modernism is continually punctured by intimations of a cruel and beautiful ancestral past. Add in the shock value of something like “Less Than Zero,” a nihilism so deep we are surprised the characters survive from page to page. Then you’ll almost be ready for the world ofGojmir Polajnar and his wonderful first novel. the abrupt narrative zoom cuts, the rapidfire switching of point of view, are dizzying, cinematic, designed to bring young Slovenia, in all its anarchic splenor, to trembling fiery life. Polajnar moves quick, and he slices deep: get on his back or get out of his way.

Weird scenes inside the Alpine mind... If you don't quite grasp the term ‘bizzare’, check this book out!

Polajnar, from Slovenia, writes from a giddy post-Communist perspective. He leads us on a wild post-ideological search for sexual identity, where a man-hungry cabaret legend; two bisexual hunks; a treacherous, brainwashing researcher; and a closeted bureaucrat claw their way in and out of love. A bawdy, rollicking, inventive comedy of manners.

This book is a serene and speedy whirlpool. It reminds me of baroque golden altars with enormous ears, in Slovenia and Chile at its highest pitch.

This is a modern tale with a medieval, fabled air, in which events transpire almost beyond the characters' intentions or will. In the background one feels the remnant pressure of East-European social and scientific fascism, but they're countered, here, by a freewheeling erotics that's pliable, permeable, maybe even mutable—and it just may take gender with it.  A kind of glamor hangs off the characters, and their wiser bodies are legends of their own telling.

Love is in the air in the form of lust you could croon (they do), as if longing had it's own melodic line. Polajnar lets our former century's shadows darken the outline, but the new one seems ready to kick things apart. The haunting is lean and quick: a neat and elegant trick.

Aaron Shurin, author of The Paradise of Forms

Born in Slovenia in 1964. Degree in Philosophy and Sociology of Culture at

University of Ljubljana in 1989. Lives in Ljubljana as a free-lance writer,

reviewer, translator and editor. Completed a variety of written works,

including a novel, short stories, a play, scripts for cartoon strips, a

film screenplay, a book of essays. Awarded a National Prize for

Young Writers by the Society of Cultural Organizations (ZKO) of