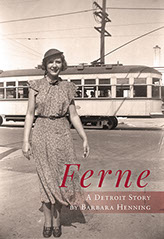 Review in The Rupture by

Ferne is a time capsule of mid-century Detroit, a city poised to explode. Its sounds, scents, and sights spill forth, as vividly experienced by a vibrant young woman whose life would end too soon. Ferne joyously curates her own life; that’s the heart of this book. But we also encounter her through the fervent eyes of her daughter, poet and novelist Barbara Henning, who lyrically fills in and fleshes out the social contours and details of the ghostly presence that haunts these pages. Through her daughter’s skilled hands, Ferne comes to life again on these pages, bringing with her glimpses of the city she loved so deeply.

Shaving the Beasts: Ritual and Wild Horses in Spain

Barbara Henning has composed a Valentine to her mother, Ferne, whose tragic young life she recreates with loving detail and an eye for family romance. The resulting immediacy gives these American proletarian figures their due, whether in the shadow of war, death or everyday living. This memoir’s fundamental power lies in breaking open memory’s dam with a heart-language that makes space for what is, after all, our common lot.

Barbara Henning is an indomitable writer, thinker, traveler and a stalwart weaver of the threads through the heart centers and margins of her own existence. This is a daughter’s complicated love story of a mother and a city and a time before we knew more than we thought to know. A poignant tribute of what haunts the premises in all the fractures and  layers in the souls of America. A brilliant—and in a strange way—a most timely intervention.

Henning crosses realms in an obsessed pursuit to track and recreate the intangible unknowns about her mother’s life and early death. In the process, she creates a new kind of documentary novel, layering a mix of documentation, memoir and story, and thereby creating the history of a woman and of a city. We come to know and appreciate Ferne within the jazzy, jittery details of Detroit’s wartime and post war life, and within the embrace of a complex family. With a poet’s microscopic eye and a collagist’s steady hand, Henning’s search for answers creates widening rings in a pool with Ferne’s premature death the stone at the center.

Ferne, a Detroit Story, by Barbara Henning, is a stunning recreation of her mother’s life. Ferne Hostetter died when the author was eleven years old. The weaving together of family photos, newspaper clippings and extracts from historical sources about the 1920s through the 1950s, gives Henning’s book a tremendous power, the magnetic power of lost chances. Dying young is very much circumstantial. But the losses Ferne suffered, reach into family life itself, which was under assault from the Depression, the call-ups of men to fight in World War II and, later, McCarthyism. Henning measures this assault without flinching and as a mark of her optimism, she shows how Ferne’s large family manages to negotiate these buffetings. Via her interweaving of source material and invented scenes, Henning creates an empathy for the woman who looks out at us from the book while asserting her dignity, humanity and grace.

Barbara Henning is the author of four novels and eight collections of poetry, as well as many chapbooks and essays. Her most recent books are a novel, Just Like That (Spuyten Duyvil 2018); poetry collections, Digigram (United Artist Books, 2020) and A Day Like Today (Negative Capability Press 2015); and Prompt Book: Experiments for Writing Poetry and Fiction (Spuyten Duyvil 2020). Barbara has taught for Wayne State University, Naropa University and Long Island University where she is Professor Emerita. Born in Detroit, she presently lives in Brooklyn. More information is available on her website www.barbarahenning.com.