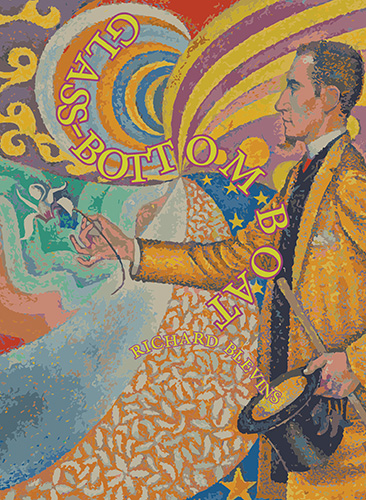 The Ship of Fools sails nightly; this incarnation of The Confidence Man takes place on a cruise ship off the Yucatan sometime in the last decade. Everyone’s got a line—part-time magicians, spiritually avaricious grad students, and Charles Olson scholars—and it becomes increasingly more difficult to figure out who’s scamming whom. At some point, though, it becomes clear that Blevins is also dealing with the problems of writing “in the age of #micropoetry and Insta-poetry,” like and unlike the problems of writing in the pre-Civil War era in a steamboat on the Mississippi. There’s some romance amidst the satire: will Lazslo and Dorothy regain their spiritual balance, learn how to read Olson and find Frida Kahlo’s Wounded Table? Blevins is sympathetic to their plight but clear-eyed about their prospects in skillful allegory more Juvenal than D.H. Lawrence or Bob Marley.

Charles Olson, the chief non-character in Blevins’ novel Glass-Bottom Boat, has been credited with the first use of the term “Post-Modern” in reference to poetry. Blevins, who knows Olson’s work as well as anyone, may have followed Olson’s essay “Projective Verse” and written the first post-Post-Modern-Projective novel.

Blevins introduces “To the Reader” his novel as an allegory (from the Greek allegoria: “veiled language”). And it is that. The standard definition is a story with a hidden meaning, “typically a moral or political one”. And it is that. And if we can read it, so is nearly every message in these days of fake news. Blevins guides us pilgrims through the progress of today’s art which appears everywhere : billboards, tv commercials such as Phil Swift’s Flex Seal adhesive, virtual museums, bumper stickers, cell phone ring tones, commercial ads imitating Pop Art, and all the many consequences of advanced literacy. Art everywhere. If there is a writer as brilliant as Blevins to redeem the ordinary, to “make it strange” enough for us to know it. We can view Blevins’ Glass-Bottom Boat as contemporary with Melville’s Confidence Man. Or perhaps with Roberto Bolano’s The Savage Detectives. Kathy Acker? Or, my favorite: B. Traven’s The Death Ship with its motto above the entry to the engine room: “Abandon all hope, ye who enter here”. That quote was applied by Dante in The Inferno for Pope Celestine V whose cowardice “opened the door where evil entered the Church”. For Blevins, it applies to the Maga Ship of State. Well, I apply it. The novel suggests it. But that’s the point. Get it? It’s supposed to hurt. 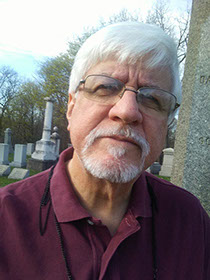 Richard Lowell Blevins is a poet writing in the tradition of Ezra Pound, H.D., and Robert Duncan, an editor of the Charles Olson-Robert Creeley correspondence, and an award-winning teacher. He was born in Wadsworth, Ohio, in 1950. His undergraduate career was halved by the May 4, 1970, Kent State shootings. He was declared a conscientious objector during the Vietnam War. At Kent State, he studied poetry and the imagination with Duncan and literature of the American West with Edward Dorn. But he has often said that Cleveland book dealer James Lowell was his most formative early influence. He holds degrees from Kent State University (General Studies, 1973), the University of Oregon (MA, English literature, 1976), and the University of Pittsburgh (Ph.D., English literature, 1985; dissertation on the western novels of Will Henry. He has taught literature and poetry writing at the University of Pittsburgh at Greensburg since 1978, also serving as Humanities Chair for nine years. He is a winner of a Chancellor’s Award, in 1999, the university’s highest recognition for teaching. He previously taught at the University of Akron and Kent State.