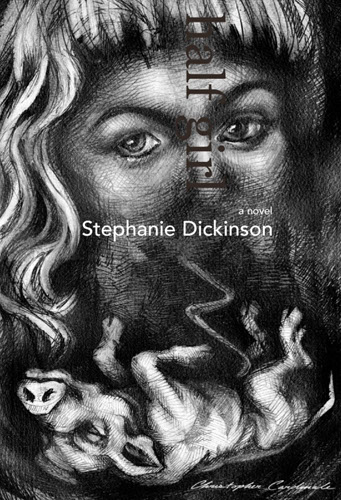 .....All the stories in The Best American Nonrequired Reading Series (2005) are exposed in their weaknesses by the one exceptional work of fiction included, the searingly strong "A Lynching in Stereoscope," by Stephanie Dickinson. Told in overlapping narratives, this ferociously-written account of the during and after of a Deep South lynching is far too invested in plumbing the emotions of the characters to be diluted by self-conscious "noodling around." One looks with real anticipation for more of Dickinson's work.

In her debut novel, the aptly-named Stephanie Emily Dickinson (who also reminds me of a female Tennessee Williams) gives us Angelique, a sort of hitch-hiking Lolita, and somehow makes her heart break in the reader’s chest.  Half Girl is 100% thrilling, harrowing, beautiful, and unforgettable.

Jennifer Belle, author of Going Down and High Maintenance

Stephanie Dickinson’s novel, Half Girl, pulls you under at once, and when you come up for air, you are astounded to be in the same room where you began. Each sentence is a surprise—a trip in the mind of a sharply sensual and adventurous girl who is leaving home and immediately finding danger in cold, lonely places. You read in fear of what might happen to her, but also with a blind faith in her hopeful determination.

Meredith Sue Willis, author of In the Mountains of America, Space Apart, Higher Ground, and Only Great Changes

Incisive and insightful doesn’t begin to describe the writing of Stephanie Dickinson. She has lived her work and enables her work to live in us. I don’t hesitate to say that long after many other writers have faded, Stephanie Emily Dickinson will be right there. Her namesake would be proud.

Chocolate Waters, Charting New Waters, Take Me Like a Photograph, a pioneer in the art of performance poetry, NEA fellow