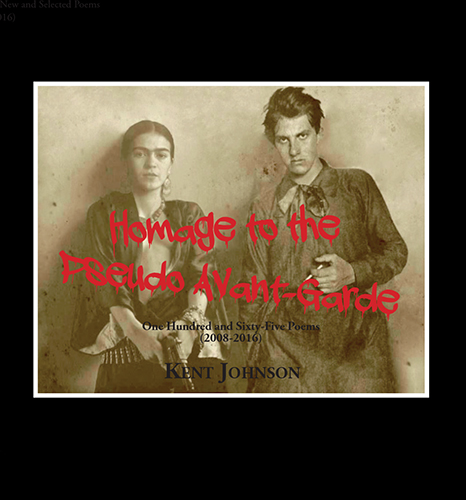 Homage to the Pseudo Avant-Garde

Johnson is intimately associated with a number of unprecedented Events, which he has produced and/or participated in that have disturbed the self-satisfied equanimity of the Literary Establishment (not least the Professional Avant-Garde), laying bare their empty aesthetic rhetoric, ridiculous posturing, and shameless careerism, at a time when more than ever we need clarity of vision . . .. Read on and thrill to the brilliance of this oner from Illinois.

– Michael Boughn, from the Preface

Like the vanguard poets whom he tweaks and honors, [Kent Johnson] is out to clear space for the new by preserving the living energy of the past and clearing away all that is dead…One hears the voice of Whitman transplanted into the national security state: the self now dispersed, furtive, anguished, mocking, at times sadistically cruel. It is not an easy voice to attend to, but…it remains indispensable.

Kent Johnson’s poems astonish me and seem to be a shock for the future. He is simply one of the most original and strange poets of the last decades. His machine poems kill fascists like a guitar.

A Pointillist portrait of an international poetry scene as exciting as anything found in Beat Literature or the novels of Roberto Bolaño.... What comes across is a life intensely lived, dedicated to poetry, and full of travels and friendships born out of the love of literature and impossible without that love.

Kent Johnson is a deadly serious, brilliant subversive. “I am in awe of you,” I emailed him recently, and I meant it.

A poetry embroiled with poetry. Poetry pitched into the fractious lineage, presented as a colloquy of voices—most of which never queue you; they’re all so perfervid to have their say. A signature convention pinched from one poet or another is catalyst enough for Johnson’s ventriloquy to toggle between papyrus and blogosphere, homage and invective. Farcical, sprawling, lyrical, smashed, shimmering, and without mercy.

The provocation of Johnson’s poetic is not an end in itself. Instead, he repeatedly challenges our most basic assumptions about what poetry can (and cannot) do.

Johnson represents our fiendish blind spots, the nature of those far cries of human murderousness alongside the fragility of identity and dignity…in hope of replenishing the means of our deliverance.

Kent Johnson’s texts are like unchained pit bulls tossed into a school yard—somebody is going to get bit… Over the years since I first met him in Leningrad, I have been both impressed & appalled at his hijinks, often both at once.

You must walk with this book, open it and read it in all your different moods: it will reflect all of them. It is both heartwarming and heart breaking. There is a simultaneous joy and melancholy to Johnson’s writing, which, of course, even as it is prose, we expect from the most urgent poems of our times.

With Kent Johnson’s new book against my breast I am pulled to the broken window and the night mist and bus exhaust and the next thirty years that will happen to all of us. 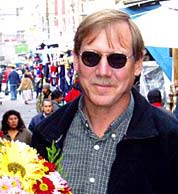 Kent Johnson has authored, edited, translated, or conceptually pirated more than thirty collections that are in some relation to poetry. With Michael Boughn, he co-edits Dispatches from the Poetry Wars, a temporary autonomous zone [dispatchespoetry.com]. He lives in northern Illinois, though not for much longer.