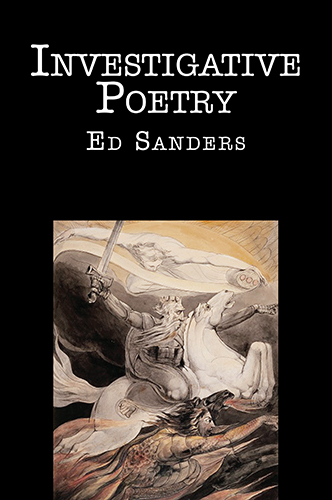 Introductory Essay for the New Edition by Don Byrd

The first law of the data site, however, is relatively simple: if complex intelligence is to continue to evolve it must act so there are more possibilities to act next time. This includes both the enrichment of the physical dimensions and the creation of new dimensions. Even people who make many new possibilities, if they use more than they make, are dead ducks. It is a mathematical law.

Don Byrd, from the introductory essay

Ed Sanders’s great document is generative Ur screed for all investigation. It reclaims power for poets designating  “’istorin”, as  scrappy  yet  sophisticated, timeless, adventure.  Investigate the Abyss! perfect rallying cry for the Kali Yuga mess we’re in. Data as sanity, as earth-touching mudra to awakened mind. Down with cognitive dissonance! Key scripture to Jack Kerouac School Naropa’s pedagogy since early inception, Investigative Poetics holds ground in this elegant new edition with elucidating preface by Don Byrd. Long live the cultural intervention this text already was and continues to be. Facing ethical and ecological crisis and loss of historical memory and  dynastic corporate control and greed,  we needed Sanders’s IP anew and available.  It is powerful apotropaic medicine to the syndicates of samsara, a tool kit for survival, mind and senses in tact. And as brilliant antidote to distraction culture, you can actually wake up in the morning and DO something!

We had early heady days at Naropa in Boulder Colorado, close to the great divide, and negative ions, and east & west sympathies and symmetries, and eidolons of TAZ and rhizome and icons and scions of the New American Poetry converging to test their mettle and imagination with one another, with  horrors of Viet Nam barely over, sixties burnout, New Contract with America on horizon.  We know the rest.  During our protests at Rocky Flats, Allen Ginsberg wrote his doc-po “Plutonian Ode” I think influenced by Ed’s method. We all knew how useful Ed’s ideas were and carried them with us to other places and into the work as well. Some of the energy for my own obsession with archive come to mind, as well as the trickle down to field poets everywhere.

Ed Sanders’ clarion call is for American poets—in a paranoid time when poems, “news that stays news,” get accused of false news--“to resume their ancient tradition of describing historical reality.” The methodology he proposed in the 1975 “Investigative Poetry” lectures has already bequeathed to us, with Sanders’ Lucan-like facility for poetry and scholarship, a quarter century of multi-volume verse histories. The advance of Investigative Poetry laps the formal innovation of “a poem including history” even as it answers Olson’s consuming desire to establish a methodology. Sanders asserts that the long-poem is history.  That poetry is the language of history. That our great poets (he names in the first few pages Pound, Crane, Williams, Olson, Ginsberg, Snyder, Rothenberg, d.a. levy) begin as scholars of primary sources. That the poem is a sharp instrument for investigating the era. A poem on the order of De Incendio Urbis is a threat to the despots of any era and all eras.  Sanders’ contemporary masters Sebald and Bolaño, lacking native histories of Investigative Poetry, nevertheless were moved to carry out detective work in prose fictions.

move over logographers and chroniclers

for the poets are

A sense of victory in remaining embedded/embodied in/ as the-book-the-bard. Rather than useless “forgetful symbols”—transitory moments that pass on us or pass us by or pass along—it is from the stance of integrities of our involvement where we create bridges to future bards. “Sweet nets of bard-babble”—permission to speak freely. In the invitation, “you make law” by “concomitant chords.” Freedom to create, I most appreciate the encouragement to keep going beyond the threat of being stopped—no matter how seemingly rich or convincing or historical that threat may be believed to be.

Some of us had the fortune of discovering Ed Sanders’ Investigative Poetry at our beginnings. For me it was the birth of the poet after many aborted efforts and has remained a major root. Sanders and the Fugs’ incantation to exorcise and levitate the Pentagon at the height of the Vietnam War, his coverage for the LA Times of the trial of Charles Manson and subsequent, extraordinary book, The Family, and his essay, Investigative Poetry, are the root of a whole generation of poets. With Dispatches’ much needed reprint here it will become a root for generations of poets to come. 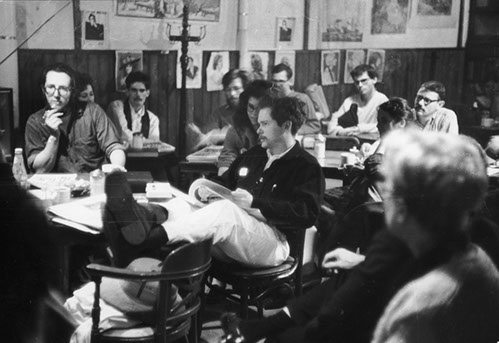