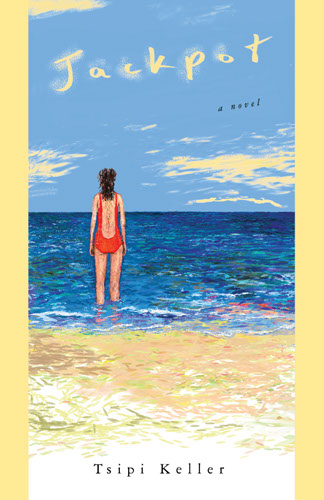 A Bahamian vacation turns into a nightmarish dreamworld in Tsipi Keller's smart, sly Jackpot. Maggie has long been cowed by her beautiful friend Robin, so when Robin leaves Paradise Island for a spur-of-the-moment sailing trip, Maggie has a chance to shine. Instead, she descends into wild gambling and even wilder sex, though she somehow retains her innocence. Keller expertly charts Maggie's transformation in this accomplished and oddly gripping novel.

Keller, then, is bilingual when it comes to the discourse of emotion: she understands both the language of bland social accommodations and the language of excessive despair. The former shouts at us like an alibi, jarring in its cheerfulness. The latter is inarticulate and sulking....It's as if this book were written both by a Henry James and a Hubert Selby, Jr.: a glittering chronicler of social mores, where exterior and interior worlds interweave a rich tapestry, and a poete maudit, who savors the most abject and perverse treasures of the human condition.

This marvelously engaging and pleasurable novel is like a cross between watching a sly Eric Rohmer film about the spiritual crisis of vacation and reading a Jean Rhys interior monologue of a woman in extremis. For all its horrific aspects, it has a steady undercurrent of humor: the comedy derives from showing the precise mechanisms of low self-esteem,

Jackpot is a compelling, shocking novel. The story of Maggie, Jackpot's main character, achieves a Dostoevskian power that unsettles the soul. In Maggie we see reflected our own humanity, vulnerability, and darkness. Tsipi Keller is a novelist whose artistry and vision command our admiration.

Jackpot is a wonder of a book. It is irresistibly fascinating—painfully fascinating. You may not feel like sharing the experiences of its misguided heroine, but you should, because you'll have a livelier time sticking with her than to your own comfortable ways. And you can always reassure yourself that you'll never end up like Maggie; although—who knows?—some day you may get the chance.  Harry Mathews

This book is addictive, intense—a psychological page-turner that doesn't miss a beat.  An exceptional work of fiction.

Keller travels a delicate emotional line. In Maggie, Keller has captured a quirky, worthy sensitivity. Jackpot flows to its conclusion with a straight-ahead style that serves to keep the nerves on edge.

The problem with novels of degradation is that the depressing nature of the narrative slows down the reading. If you like the character, then you'll not like seeing the character take a trip down the big swirly. Keller gets the reader past this with her present-tense prose and the wealth of understated humor inherent in her perspective on her character.

At less than 200 pages, Jackpot would not seem to be a demanding read--but I warn you, Keller's Maggie has the power to take you along with her. That slender volume is, like Maggie's planned seven-day vacation, deceptive in the duration of its effect.  Pat Cummings

It isn't very long before you realize that Keller has caught you in a deceptive web of shallow ideals and insanity that in no way resemble the bland Ally McBeal psycho-babble you were prepared for. As a matter of fact it's closer to the ever-descending rings of hell of Hubert Selby's Requiem for a Dream. Unlike the intensity of Selby's work, Keller's story has a hypnotic, seductive quality that pulls the reader further into Maggie's escalating disintegration.

“She is on a roll, nothing and no one can stop her." By the time this illusory revelation occurs to Maggie, while she is in a tropical island casino surrounded by gamblers ("They seem to be in a hurry, oblivious to the small wins, waiting for the long, sharp wail of a jackpot win."), we know she's just kidding herself. This is gambler's logic, and Maggie is about to wager everything—money being the least of it—on a single, perilous spin of her life. Talked into going on this holiday by her glamorous, wealthy, but ultimately callow friend Robin, Maggie abandons her unsatisfying, if safe and quiet, life quickly and fiercely once she reaches Paradise Island. I guess you could call Jackpot a beach read's worst nightmare, in the best possible sense: sun, sand, and palm trees cannot begin to mask the dark corners of this paradise.

Tsipi Keller masterfully presents the story of Maggie, who discovers that Paradise Island is paradise lost when her traveling companion's betrayal leads to her own descent into the underworld of greed and illusion. The glittering casino—island within the island—nearly eradicates the sea. And water, primordial emblem, is the only substance that can break the spell of Maggie's emotional and sexual degradation. Jackpot is a deeply disturbing and haunting novel.

Jackpot is a daring novel of particular interest.The genius of the narrative is its vivid and hypnotic prose, which makes the incremental unraveling of the self seem not just plausible but logical. Unsettling and profound.

Keller is a skillful writer who is unobtrusive in the practice of her skill. Her observations are keen and she draws a spare but exact picture of a moral decline and the setting in which it occurs.

Jackpot is the haunting tale of a woman, so insecure, so toally devoid of any sense of self-worth, that she is nakedly vulnerable to every slight, real or imagined. Having no inner resources and unable to connect in a meaningful way with any of the people around her, Maggie, feeling abandoned, embarks on a path of self-destruction. This is a frightening and cautionary description of a young woman's descent into near madness as she becomes ever more detached from reality. The reader watches—yes, watches is the correct word, so compelling is the imagery - in horrified fascination as Maggie spirals downward. Her inner monologue reveals not only her utter vulnerability, but her pathetic and futile attemps to fill the empty vessel that is herself, to find in herself some redeeming worth. In the end, she can no longer keep up the pretense. She knows who and what she is and finally, facing that realization, she summons up the strength to take control of her fate at last.

Tsipi Keller was born in Prague, raised in Israel, and has been living in the United States since 1974. Her short fiction, and her poetry translations, have appeared in many journals and anthologies; her novels,The Prophet of Tenth Street (1995) and Leverage (1997) were translated into Hebrew and published by Sifriat Poalim. (Currently, The Prophet of Tenth Street is being translated into German.) Keller’s translation of Dan Pagis’s posthumous collection, Last Poems, was published by The Quarterly Review of Literature (1993), and her translation of Irit Katzir’s posthumous collection, And I Wrote Poems, was published by Carmel in 2000. Among her awards are: A National Endowment for the Arts fellowship, two New York Foundation for the Arts grants, and an Armand G. Erpf award from Columbia University.