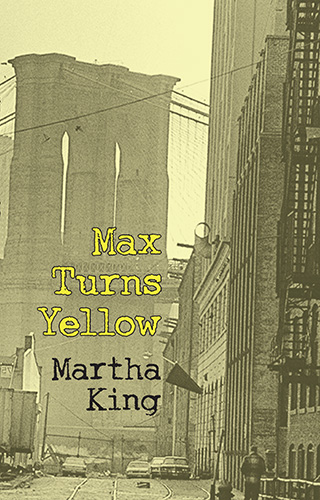 Martha King’s riveting mystery, Max Turns Yellow, is an impossible-to-put-down yarn involving two separate stories that get braided together into one frightening whole that entwines a weirdly dysfunctional family and a murder – and both threads involve the written word.  I should point out that this entire strange, sad mélange takes place in New York City; Vinegar Hill, to be exact, though other boroughs figure in it too. Martha King knows her city backwards and forwards; and she understands the ins and outs of financial shenanigans as well. Though the book is set in the 1980’s, it resonates with the current situation our country is in all too well! Max Turns Yellow is a must read!

Ron Kolm, author of Swimming in the Shallow End

I know it’s a cliché to say I couldn’t put it down, but Max Turns Yellow carried me so effortlessly along, I finished it in two sittings. Honestly, it’s been awhile since I’ve enjoyed a book as much as this one. And, as a writer myself, I’m kind of in awe of how it begins; it just drew me in before I even knew what happened, and I was delighted.

Another page-turner from Martha King.  This second book in the MAX series is set in Brooklyn’s famous Vinegar Hill as well as in the middle of a major cancer research center in Manhattan. Ms. King once again thrusts the reader into her protagonist’s specific geographic space and puts him or her among New York’s downtown artists, writers, and hangers-on. And again this entertainment offers much to think about.

Patricia Ryan, author of Living with the Brooklyn Bridge

Max is back and the mayhem is spreading. Martha King’s artist detective once again finds himself in the center of a web of violence and intrigue when the brother of his partner, Britz, lands in big trouble after getting busted for publishing a dead man’s manuscript as his own. When Britz turns up dead, Max sets out to find her killer. Notable for King’s intimate knowledge of the bohemian art scene in Brooklyn in the 60s, Max Turns Yellow is an intricately plotted page-turner that will keep you guessing even as it delights you with its nostalgic portrait of a long vanished Brooklyn.

Michael Boughn, author of the crime thriller Business As Usual

With a sharp eye for detail that’s always true to its time and place, Martha King delivers a mystery set firmly in the psychological. Her lived knowledge of the tribal New York art world informs this chronicle of how camaraderie, blood ties and bohemian domesticity can become dislodged by rivalries, rumor, and the shifting alliances of being Outside/Inside, the title of her excellent memoir. In this second volume of her Max trilogy, after Max Sees Red, King creates another riveting ride with her complex protagonist at the center of a disparate group of eccentric, flawed and risk-taking characters. This reader awaits the third and final installment with great anticipation.

Max Turns Yellow...begins with a shocker, is filled with unexpected but plausible twists that keep piling up, has moments of real menace (especially in relation to the Mafia’s hangout), and there are times when suspense is ratcheted up to exquisite heights.....She has supplied a taut story...while offering a profundity of theme and character that goes beyond generic [crime fiction] expectations.

characters, authentic American dialogue that rings true to the ear, a complex narrative, with many sub-plots, and is compulsively readable. But it is also a poet’s book....King is a essentially a minimalist: each word, each descriptive sentence or piece of dialogue is carefully measured, for sound and effect and is essential; there’s no ornamentation or “clever” sentences.....The novel deals with issues of gender, race, and class, themes running throughout her work....There is also humor throughout and King is at her funniest when poking fun at the art world and the world of the academy.

Peter Valente, Excerpted from a long essay “Am I Saved Yet Sister? Is it Morning?” in Talisman Journal #48  (winter 2021) which considers the whole of King’s work

A story like this calls for great delicacy in plotting... and it is here that King shines. She puts together a set of believable, linked encounters that keep him unearthing new strands of the case, which draw him further along....The dilemma of what is going to happen to Sydney [the mixed-race child of the murdered woman] causes as much soul searching in the community as did the death. This strand of the book gives it an emotional weight, a gravitas, that makes it--if you haven’t figured this out already-- not a light entertainment but a thoughtful, searching look at what holds together and pulls apart community ties. 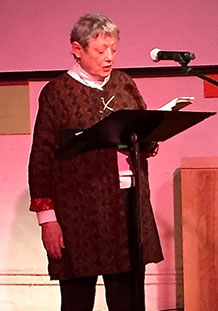 For a few years, Martha King and her partner the painter/poet Basil King owned half of an old house (and former bar) on Hudson Avenue in Vinegar Hill, Brooklyn. That was some ten years earlier than the 1980s in which this story is set. The first “Max” novel (Max Sees Red) was published by Spuyten Duyvil in 2019.  She is currently working on a third (Max Hates Blue) and is grateful to Spuyten Duyvil who also published two collections of her short stories, Little Tales of Family and War and North and South.

For information about her other books and publications, please visit