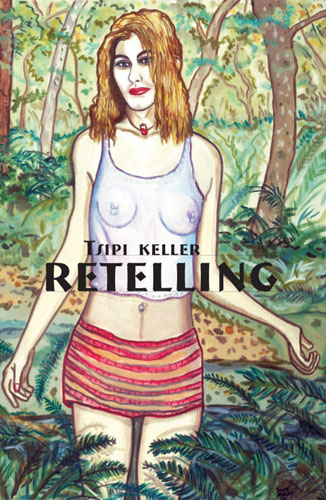 Readers of Dostoyevsky's “Crime and Punishment” always know that Raskolnikov committed murder, but they often don’t know whether Raskolnikov knows that he committed murder. It is in this wonderful vagary, more than among any writerly tricks of mood, foreshadowing or scenic alteration, that one finds the origin of the so-called psychological novel, a genre that has become largely moribund in an America in which consciousness is often postmodernized into hocus pocus, or ignored altogether for the sake of the heartless thriller. In her new trilogy, Tsipi Keller is revealed as a superlative psychological novelist....a writer who is among the most subtly compelling of our time.

Capturing the waft and drift of her un-heroine's unstructured days, Keller has a keen eye for the territorial pissings and unspoken resentments of immature female friendships. Retelling is foremost a discomfiting novel of loneliness—perhaps we can all recognize some past or present version of ourselves in Sally, alone in the dark trying to piece together the shards of ugly memories.

... Retelling is great at maintaining mind-bending suspense, and it never entirely rules out the possibility that its narrator is simply an odd case. The book questions its own sense of reality a few times too many, but the buildup is justified by the powerful final arc. In the end, Keller gives her narrator’s eerie delusions free reign—an apt conclusion for this heartfelt and willfully perverse novel.

The mystery of who butchered ethereally beautiful and pregnant Elsbeth is at the heart of Keller's elegant and spooky second novel (part of a trilogy, after Jackpot). Was it the traumatized and fragile narrator, Sally, whose friendship with the dead woman verged on the obsessive? Or was it Elsbeth's arrogant and demanding boyfriend, Drew, who resented Sally's relationship with her? Keller flirts with the answer as her novel slips back and forth through time to depict tantalizing glimpses of possible truths filtered through Sally's uncertain memories. As her emotions unravel, Sally finds solace in the gentlemen who play chess in the park where she breakfasts, and maintains, however fitfully, an uneasy reliance on Lydia, a self-centered and mean-spirited friend who thinks Sally is better off with Elsbeth dead. The police, bent on extracting a confession from Sally, harangue her during increasingly abusive interrogation sessions that provide her a forum for creepily pondering her (questionable) innocence. This opaque yet beguiling novel showcases the work of a talented and original writer.

Tsipi Keller was born in Prague, raised in Israel, and has been living in the United States since 1974. Her short fiction, and her poetry translations, have appeared in many journals and anthologies; her novels,The Prophet of Tenth Street (1995) and Leverage (1997) were translated into Hebrew and published by Sifriat Poalim. (Currently, The Prophet of Tenth Street is being translated into German.) Keller’s translation of Dan Pagis’s posthumous collection, Last Poems, was published by The Quarterly Review of Literature (1993), and her translation of Irit Katzir’s posthumous collection, And I Wrote Poems, was published by Carmel in 2000. Among her awards are: A National Endowment for the Arts fellowship, two New York Foundation for the Arts grants, and an Armand G. Erpf award from Columbia University. Her novel, Jackpot, was published by Spuyten Duyvil (2004).