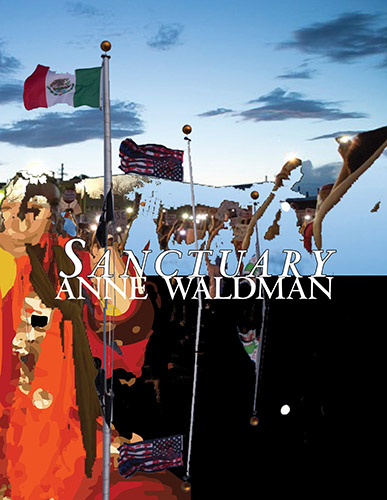 (Addenda)   with collages by t thilleman

things have not been made, the reason for being has not yet been found.”

How it started to be Sanctuary as an Addenda as a kind of zine, and a collage was clear bell of writing, with voices ringing (“Sung Devotions”) that belonged in frame of the Iovis project, which purported to take on Patriarchy, war, the polis, plutonium... and considered male poets riding a book of male energy morphing to a more feminized “end” in concert with a rattle snake “visitation.” An antidote to fear, and a bow to the animalia dharma mind and practices of attention moving beyond boundaries. The asylum of vipassana. Wanted next to return to Southeast Asia. And land periodically to center of chronicle which was a little green folder already including “Moon in Aries” & “Ceremonies in the Gong World” that had been put aside as chapters in The Iovis Trilogy (lovingly published by Coffee House Press in 2011) but  cannibalized for best bits and stood ground. Decided on Kuala Lumpur:  start back there as if I were hitching another ride.

Editor Thilleman was reading Iovis on his back porch and sending encouraging response that initiated some lifeline through political calamity and vicissitude.  And this selection pulled together July 2019 when something snapped about children being separated from their families at the borders. And there were already these skinny Iovis poems responding to Kavanaugh, Mueller, the “evidence” of text and testimony. And homage to Black Mtn, a sanctuary, and more protest.  And cut-up odd asides to methodologies of Hannah Koch, and Donald Judd in his Marfa, a sanctuary.

Had to see for myself the border on the ground. Had been half a century since I crossed by foot. Sanctuary is someone writing to you about writing, sanctuary is a dream shelter from the injections of poison, sanctuary is a montage of notebook antidote, sanctuary is the places given you to perform in public space. Sanctuary is Giambattista Vico’s enlarged plebian sense of rights, an “arc of justice.” Sanctuary wants to be the wide skirt, like a tent, of the Madonna del Parto for those who seek shelter.

Almost a book of hours a book of days as lines respond to times and places on the fly including pics taken of protest in hotspots around the world. Spain, Italy, Mexico, USA, my editor morphed into collages. I was also spending more time in Mexico from 2016 with artistic cohorts on numerous projects. I remember looking toward Juarez as we performed on the site of the Agricultural Workers in El Paso, where a month later innocent people were felled because of the racism emanating from this increasingly toxic side of the Divide. Sanctuary is ongoing daily practice of the wilds: call and response.  Do no harm.

cop escort to the parking lot at the ICE Detention Center

aubade for the liberators,

Internationally recognized and acclaimed poet Anne Waldman has been an active member of the “Outrider” experimental poetry community, a culture she has helped create and nurture for over five decades as writer, editor, teacher, performer, magpie scholar, infra-structure curator, and cultural/political activist. She has read in the streets as well as numerous larger venues such as Casa del Lago in Mexico City, a program she also curated in 2017, the Dodge Literary Festival in the USA and the Jaipur Literature Festival in India and continues to teach poetics all over the world. She remains a highly original “open field investigator” of consciousness, committed to the possibilities of radical shifts of language in her voluminous poetry texts as well as exploring states of mind to create new modal structures and montages of attention. She is the author of many books, including the mini-classic Fast Speaking Woman, published by Lawrence Ferlinghetti’s City Lights Books in San Francisco, a collection of essays entitled Vow to Poetry and several selected poems editions including Helping the Dreamer, Kill or Cure and In the Room of Never Grieve. She has concentrated on the long poem as a cultural intervention with such projects as Marriage: A Sentence, Structure of The World Compared to a Bubble, Manatee/Humanity, which is a book-length meditation on evolution and endangered species, and Gossamurmur, an allegory on the rescue of poetry’s aural Archive. Her anti-war feminist epic The Iovis Trilogy: Colors in the Mechanism of Concealment, a 1,000 page 25 year project, won the Pen Center Award for Poetry. Waldman’s major publishers are Penguin Poets and Coffee House Press. Voice’s Daughter of a Heart Yet To Be Born (2016), as Lyn Hejinian says, “brings Waldman’s work into the more intimate paradoxical folds of poetic (and prophetic) knowledge.” Recent books include Jaguar Harmonics in both English and French editions, and Trickster Feminism (Penguin 2018), of which Erica Hunt writes “Waldman’s poems enact insubordination, a kind of pinwheel parataxis, to offer a necessary second sight.  We are summoned to peer past appearances, past the sense of square-one beginnings and ineluctable dead ends.  Instead we are invited to raise our gaze afresh and rise to our feet.” Waldman is the Artistic Director of the Summer Writing Program at Naropa University’s Jack Kerouac School of Disembodied Poetics, swp@naropa.edu. Website: annewaldman.org 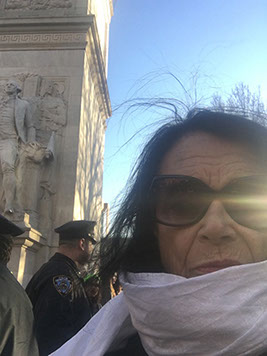