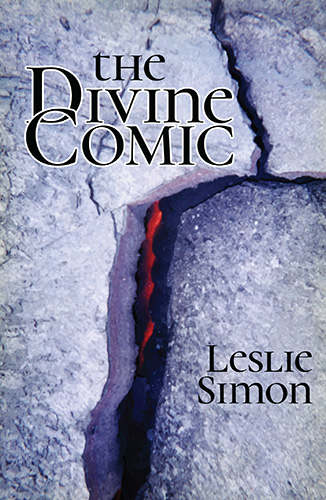 The Divine Comic’s main character, Beatrice Rubenstein, a Chicago immigration attorney, is a deeply conflicted Jewish American woman whose partial estrangement from her younger sister Leah arises from their divergent views on Israel and Palestine. Beatrice’s childhood friend, Danny Gonzalez, a gay stand up comic, dead from AIDS, and anarchist Emma Goldman, his sophisticated sidekick, interrupt Beatrice’s narration, bringing some levity to her tendency toward self-flagellation. Leah, who wrote a brilliant doctoral dissertation on Emily Dickinson and now makes her living selling silver and other collectibles at Los Angeles flea markets, bumps into her own transformation, which brings the story to its powerful conclusion.

Leslie Simon has opened her own magical door, a novel of two dissenting sisters (and some kibitzing ghosts), estranged, entrenched in their positions, every bit as emotional and polarized as counter-demonstrators yelling at each other outside an Israeli embassy, and because she has given us fictional people to love, drawn us into their furious, aching hearts and the wild and semi-supernatural chatter in their heads, she’s made it possible to be curious about what we disagree with, made us want to understand what makes them tick, brought us to the family dinner table, where we can sit down with the whole menu of anguished arguments and notice, in the midst of raised voices and waving hands, how much we yearn to find our way to each other.

With passion and humor, she has made a literary clearing where polemics take on flesh and personality and dreams, a place full of haunted pasts and family dinners, actual journeys and journeys of the broken heart. With the help of two highly articulate dead people, she constructs and shatters her heroine’s certainties, taking us deeper and deeper into these women’s lives, making us listen, softening the hard places, until we are no longer spectators, until our own stories, the ones we each hold in our bones, in our bellies, about these two peoples, this one land, this war and all its long roots, until our own stories can no longer sit still, until they push aside the empty plates, the dregs of wine, lean forward, still listening, elbows on the tablecloth, hearts in our throats, and speak.

from the foreword by Aurora Levins Morales, Author of Remedios:

Stories of Earth and Iron from the History of Puertorriqueñas

Leslie Simon has crafted a work that provides another step in the essential discourse for transforming the Israeli Palestinian conflict. The characters are riveting, real and narrate the story through lives lived on a daily basis…The writing is captivating, so much so that I can hear the charged ferocity and feel the thrust of the pain throughout. Through the lives of the sisters, possibilities evolve that we all need to consider.

The Divine Comic is an engrossing, powerful descent into the agony of American Jews trying to come to grips with a shattered dream. It’s a close study of a family with a past rooted in radical, anarchist and communist politics, haunted by the Nazi mass murders, and wrestling with their dismay over Israel’s treatment of the Palestinians. The narrator, who travels to the Middle East to meet Israelis and Palestinians, reaches the conclusion that she must reject Israel’s occupation and Zionism but she has to reach out to her sister who has a history of angry rejections and whose own anguish pushes her close to suicide. The conflict unfolds, as it often does, at each Passover as the family comes together. These aren’t the usual family get-together blow-ups; instead, these are the arguments of a very politically aware liberal Jewish family thrown into crisis…Leslie Simon presents their tension with wit and insight. The Divine Comic is a rare book, dramatizing a transformation of attitudes that affects all Americans deeply.

The readers of Leslie Simon’s novel The Divine Comic will quickly feel at home with the deftly drawn characters who also embody the theme of the necessity of dialogue, of sincere, plucky efforts toward reconciliation and peace. Two of the major characters, the two sisters, Beatrice and Leah, stand for integrity/justice versus security—justice for the Palestinians, who are made homeless in their own home and security for the indigenous as well as the Holocaust-driven Jewish immigrant populations. Ultimately, the basis of this conflict boils down to those two words. Do those two words/values always have to be on a collision course? Simon’s novel offers the hope, persuasively, that this either-or fallacy can be overcome. With The Divine Comic, Simon has raised the genre of political novel to unparalleled heights. I look forward to using this novel as a required text in my class on American Cultures in Literature and Film. I have been waiting for such a book for a long time. 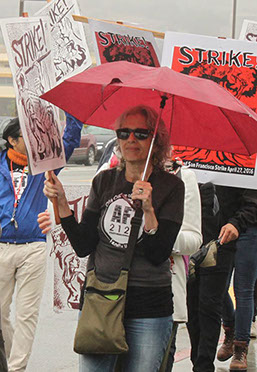 Leslie Simon is the author of Jazz/ is for white girls, too (Poetry for the People), i rise/ you riz/ we born (Artaud’s Elbow), High Desire (Wingbow Press), and Collisions and Transformations (Coffee House Press). She co-authored (with Jan Johnson Drantell) A Music I No Longer Heard: The Early Death of a Parent (Simon and Schuster). She has published essays on film, literature, and politics and teaches at City College of San Francisco.