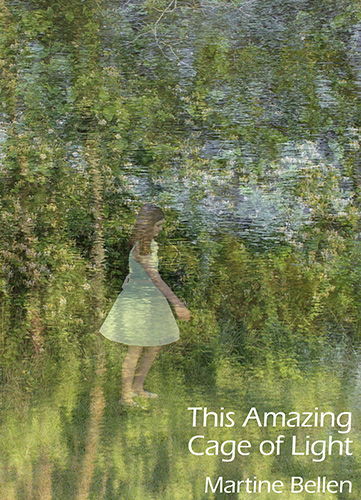 This Amazing Cage of Light

Martine Bellen invokes a new Muse, a new daughter of Mnemosyne, in WABAC Machine. In these poems, Time itself is the traveler—visiting epic, visiting nightmare, mischief and the Land of Heart’s Desire. To Bellen, Time is a creature alive for an instant, and the instant reaches very far indeed, in every direction, even so far as the laughter of the gods. —Donald Revell

WABAC Machine begins innocently enough with the thought that a cat has no real name and proceeds through inexorable dream/​dervish/​fairy tale logic to a place (the wild?) where nouns dissolve. This is a world of radical flux where self is barely even a construction. Let’s call it post-human. There is nothing academic about it. Things loom up and are always something else. Here it makes perfect sense for one ‘me’ to say, ‘I sell temporary kitties in the form of reconstituted sponges.’ —Rae Armantrout

The poems in Martine Bellen’s WABAC Machine are delicately rugged all-terrain vehicles for traversing multiple worlds. The work is magically both ornate and simple, exotic yet homespun. —Elaine Equi

Martine Bellen’s psychological and linguistic adventures in poetry are unlike anyone else’s. Celebrating the instabilities of our experience, her poems maneuver kaleidoscopically between ordinary life and myth or fairy tale, vital human concerns such as identity and dreamlike atmospheres where nothing stays as it appears for long. Her ‘host of unlikely divinities’ display a reality that is never ordinary, always evocative. —Charles North

Martine Bellen’s fabulous new collection GHOSTS! is a mosaic fable of descent and return in which a postmodern Cinderella who ‘likes to fuck and fuck’ seeks a door for which she is emotionally the right size. It is a book of loss, in which lovers and fathers turn to ghosts and join with the winds, and also of redemption and recovery. The imagination fiercely demands to ‘re-member’ what has been torn to pieces. Like the poet H.D., to whom she pays tribute in the beautiful first poem, Bellen displays purity, even gnosticism, of thought.   —Paul Hoover

When one thinks of ghosts, one imagines beings that are both literally and figuratively unresolved. Like a flickering fluorescent bulb, a ghost occupies the liminal space between life and death, presumably because of an unfulfilled need for closure. Bellen, whose Tales of Murasaki and Other Poems won a National Poetry Series award, carries this theme forward in her current collection with a lyricism more germane to the living than to the recently departed.  —Chris Pusateri, Library Journal

Sketched within three series of poems, a woman’s story reflects and refracts through the brackets of life and death, and the ‘story,’ as I have called it, never manages to dry into any flat sort of wholeness. How to see her? It would be like defining what Ingrid Bergman was like through the six films she made with Rossellini. What happens in GHOSTS! is, on the other hand, strikingly similar to what happens to Ingrid in Europa ’51 and that one with George Sanders—we change, change utterly as the words mount up to our waists like dry leaves in a red country.  —Kevin Killian

Contemporary poems on the ancient past have to be ghosts. They are dragged through the inscriptions of strangers until they become something ethereal and gray. And in that spectral light, as we know, colors become brighter as if shining from rain. This is how I read these poems and find them fresh. —Fanny Howe

Martine Bellen’s The Vulnerability of Order brings to contemporary poetics an acute, agile intelligence revealed in a dazzling array of linguistic orders, as vulnerable as they are powerful. Her inquiry into the nature of spirit is informed by arcs of interlocking knowledge, from a variety of religious practices to biological incidents in the lives of seven heretical women.

A multivalent, multidirectional logic dance across categories to a space where we cannot tell if a lover ‘is parting or a part of mist and memory, the path is endless.’ It takes our breath away as it leaps across continents and centuries, from pre-Columbian Mexico to Japan, from myth to biology. Out of the intervals, out of the body of words, arises a wonderfully rich music that ‘never stops being magic, not quite green but it created a before, a bus stop.’  —Rosmarie Waldrop

Martine Bellen is a poet of refreshing complexity. Her unpredictable disjunctions and conjunctions and her baroque mix of vivid images and meticulous abstractions make one uncertain whether these poems (in verse composed of prose segments) are precise narrations of the contingent or of dreams or of the former masquerading as the latter. They are full of surprises.  —Jackson Mac Low

Echoey music, sweet and provocative, is the lure in Martine Bellen’s language maze, where word opens onto word as though in search of a secret exit, or perhaps just deeper harmonies, deeper allure. Language’s old formal pathways, the song says, are not enough to take us places people dare not enter. —Robert Coover

Martine Bellen’s poems dissolve the world of ordinary conversation and etch out patterns that demand another kind of world, one in which Satan is satin—but still Satan. And then it comes as something of a shock to find it’s in fact our ordinary world still, which she has somehow gotten from a new angle. A real achievement.  —Keith Waldrop 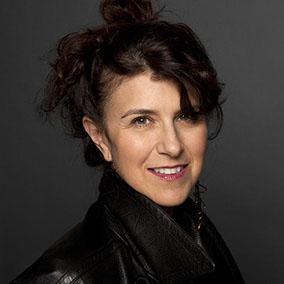 Martine Bellen (martinebellen.com). Martine Bellen is the author of nine collections of poetry including GHOSTS! (Spuyten Duyvil); The Vulnerability of Order (Copper Canyon Press); Tales of Murasaki and Other Poems (Sun & Moon), which won the National Poetry Series Award; and the novella 2X2 (BlazeVOX [BOOKS]). Her bilingual collection, Musée Magie, has been published in Germany by Verlag Waldgut (translator, Hans Jürgen Balmes). She has written the libretto for Ovidiana, an opera based on Ovid’s Metamorphoses (composer, Matthew Greenbaum), which was performed in New York City and Philadelphia. She collaborated with David Rosenboom on Ah! Opera No-Opera, a collective work, co-composed and performed by creators from around the globe. Its world premiere was at Redcat in L.A (for more information, visit www.ah-opera.org). She has co-written, with Zhang Er, the libretto of Moon In The Mirror: A Monodrama—composer, Stephen Dembski—based on the Chinese legend of Chang E. She has been a recipient of the Queens Art Fund, New York Foundation for the Arts, the Fund for Poetry, and the American Academy of Poets Award, and has received a residency from the Rockefeller Foundation at the Bellagio Center. Bellen is a contributing editor of the literary journal Conjunctions.