The Glossary of the Specifying Tone 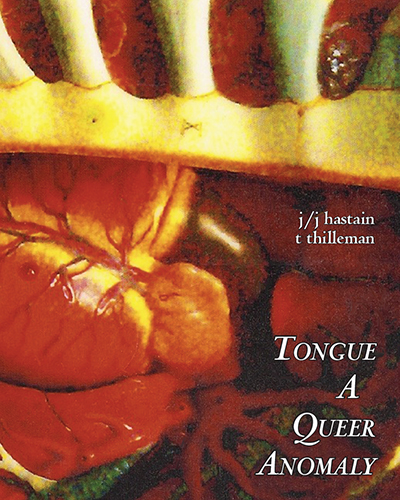 What happens when two brilliant and sensitive minds unfettered by conventional categories brave the inter- and intra- personal depths of humanity and engage one another—and all of us—in the generative dance of definition via a monumental, no-holds-barred cornucopia of all things sensual, experiential, spiritual, and imaginable? This does. And you won’t want to miss it.

"The cruise director, that great and abominable Noah, keeps shoveling the elements of species along,

in his wood warping boat."

and allowing us to rediscover the etymology of our own being.

Tongue A Queer Anomoly is a Samuel Johnson’s dictionary—if Samuel Johnson had absorbed Foucault, Jeannette Winterson and Johnny Rotten—for the chaotic, universally catastrophic, collapsing, latter day, ruinous, emerging world. The language in this post-post-post lyrical and gently violent piece of irreverence and linguistic revolution by j/j hastain and t thilleman is a radical, lovely, lush, painful reinvention of language word by word, image by image, concept by concept. This is a dictionary for the new body, the new sexuality, the new collective, the new wrecked, fragmented Homo Sapiens, for the new damaged world.

language and thought become synonymous as hastain and thilleman leave behind the logic we impose on language to make it useful in the ordinary world. these are not ordinary worlds that hastain and thilleman traverse – these are the worlds of perception/psyche/reality/life/language before we impose strictures of sense on them. hastain and thilleman play with sense and nonsense as it all accrues meaning – all kinds of meaning – the meaning of sound the meaning of rhythm the meaning of images the surprising meaning of the surprising juxtaposition of images – even the meaning of simple common sense. i.e., meaning in emily dickinson’s “much nonsense is divine sense.”  abandoning language’s obligations of the ordinary [and especially that to convey truth], hastain and thilleman enter into a play with language that is joy – for them and for us – and in that joy discover levels of “truth” which become “true” for them having been written – read – thought as uncontrolled thought language as uncontrolled language that in and of itself is a moment’s truth. long enough. doing this in the way of what i call the chaos theory of literary action, hastain and thilleman apply heat [read passion, imagination, abandonment] to the form [of thought and language] to discover new form. not formlessness, but new, inimitable form. a form in which there is no distinction between language and thought: they are one. even no distinction between language and thought and reality. they are one. the creation/discovery of form is the primary creative act. we are not reading a newspaper we are reading news made new by coming into the written in the act the action of writing.

In this collaboration between two poets — two liberators — true inventiveness lives at the forefront of experience and is delivered in a glossary of "queer diction."  Referred to as a "psychic" book by the authors, the words on each page don't serve as anchors to meaning, but let loose any kind of identity to be what it wants to be at the moment.  In this way, we — along with the usual chokeholds of implication — are all freed.  To read Tongue is to experience a hinge as an "open field, with nothing else in it…the deepest kind of relief."  And just as "sommeliers made us feel our tongues in the words, the fruit's sugar" and "a tongue is a sea of taste and will only harbor travelers,Tongue invites us to soar — to taste and see and feel in any number of ways we didn't know possible.  It is an experiment gone right, and there is no lack of sensuality: "I wanted you to call me a snow figure so that later…you could melt my skirt with the heat of your look..." Tongue emancipates us from "the lower depths to the treasure trails of light" and encourages us to turn from the last page back to the first to begin again, for "What is given to us is what we demanded."

Tongue A Queer Anomaly is just that, a lexicon that deviates from the common rule. A queer glossary that presents us with a new language, a fresh nomenclature birthed by poets t thilleman and j/j hastain in their revolutionary, ongoing collaboration. Weaving myth, the primal with the post-modern, the body politic becomes a great mother melding into the essential, the male and female mind bonding in definitions that become ecstatic incantations. In a time of media war and cultural collapse, Tongue reminds us that words are sacred. They conjure and enchant. They destroy. Here there is a celebration of what is sensual, sexual, allegorical, primordial, delightful, and whacky. A blending of truth and fabrication, of high-minded purpose and high jinx. Try “Discombobulate    Twin balls in a glass jar behind a screen of mirth, bonk before grovel.” In Semicolon the commas speak for themselves, “alluvial tresses, symbiosis, enfolding effulgent.”  Such a glossary is necessary in our age of flattened, ironic, clichéd, and vulgar language. thilleman and hastain serve us edible language as they reorder the house of words. “Statesmen       We cannot stop their clichés. They are the demons of statuary.”  Tongue sets itself in opposition to the demons of statuary. The poets elevate what is subtle, nuanced, lavish, and strange.  Like “the soup tureen, full of magic brew-stew” prepare to be overwhelmed by its riches.  An explosion of hyperbole, understatement, and oxymoron.

Presented as a glossary, this fat little book is a captivating collaboration between t thilleman and jj hastian. A refreshing hybrid of prose poems, proclamations, philosophy and plans, it’s an exegetic unveiling of language and thought. Structurally it’s also very much an epistle of emails as the two authors meld their mix up into a persistent and pleasurable alloy seething with intelligence and lyric impact. Serious reflection fuels this full-on romp through pages wrought with interstitial comments gleaming like blinding seams. As the two authors explore their own preoccupations they also bring to life the inescapable border between two individuals. They go at their process in a state of perpetual awareness. Between the homey and the hermeneutical, a lyric edge is polished as our authors shed their inhibitions and activate syntactic synapses. The relationship is described as: “All presence, no presentation.” And it is a present like no other. 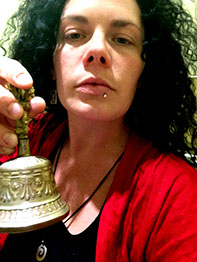 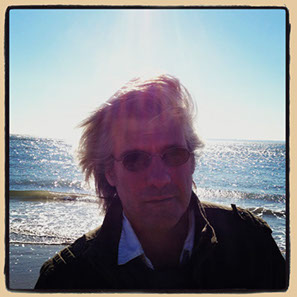 t thilleman migrated to New York from the Mid-Western State of Wisconsin in the early 80s. For a brief period he worked for Pace Editions and the artist Chuck Close on handmade paper editions under the direction of the late Joe Wilfer. Through-out the 90s he helped edit Poetry New York and their pamphlet series. He is the author of more than a few poetry collections including Three Sea Monsters, Onönyxa & Therseyn (opening book for an extended work, Sketches), and the novel Gowanus Canal, Hans Knudsen. His collaborations with j/j hastain are Approximating Diapason, Clef Manifesto, Snag as well as the forthcoming glossary, Tongue a Queer Anomaly. His literary essay/memoir, Blasted Tower, was published in 2014 by Shakespeare & Co./Toad Suck. Ongoing and online, tt blogs musings taken from the Kamasutra and others at conchwoman.wordpress.com. The companion book to Snailhorn, with essay and drawings, is Entering Yoni Space On The Pouring Pivot Of My Own Lingaraj.