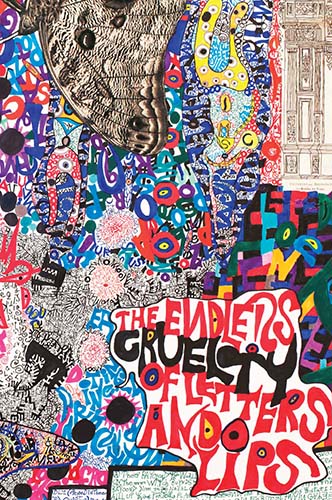 TUB BUNNY whets us from the very first with playful, pun-full sonority: “Flapping his gums wildly, his wild ghost wildly said: wild and sweet, pure white crabapple blossoms . . . Shelley rhymes with her belly.” Sublime subconscious mind. Fully incantatory, hot mythic mess. Poetic palimpsest. Felt here, in the body, erotically expressing the word. Seeding the s/he said dichotomy: “Her ghost said: you do not remember me, you remember yourself./ He’s just using her like any of the fine threadlike strands that sprout sweet from the human skin./ While French kissing at the drive-in, she thought why use the alphabet, assassin, bind, I can read your mind.” Jazzy ghosts generate rhyming shadows: “His ghost said: I am not sure, of anything, but I think the ghost said: tub bunny.” Practicing the sacred sacrilegious: “Beaver Island, yes, there is such a place! Imagine! Say three Hail Marys.” “Jingling jiggling keys that make the past lives live again.”

Self described as "a syndicate of types" Tub Bunny is that and more. It is a breaking of types, of poetry presumptions, of the pretense of projective dictums, of pre-determined language assumptions & LANGUAGE school restrictions. This is verse truly free. It has its predecessors : Rimbaud's "Vowels", e e cummings' language playground, Vachel Lindsay's "aural and temporal experience", Kenneth Patchen's "Orange Bears" and, AND, Albion Moonlight, Keroauc's "broken eggs" of wasted words, and most of all Velimir Khlebnikov's Zangezi (but also his poems of the Russian Civil War that rivaled the Objectivists' precise present of historical fact). Tub Bunny, a book, a real book, of wonder and delight.

Michael Basinski’s Tub Bunny is full of “Impure vowels. / Hypnotic spellings.” Poetry haunts his and her ghosts. They sing about Cheektowaga, NY, USA, where winter haunts the Walden fields of May, June, and July. The summer months of Buffalo—“lawn fates,” carnival games, Iroquois draft for $1 a large cup! Imagine that! The consumption of teenage lust (how it’s never enough), like John Keats surviving off anchovies and a single loaf (Al Cohen’s seeded rye?). The diet was intended to reduce blood flow to his stomach. Basinski writes, “Such is his nature of his being haunted. He could see things in the dark, and he was tongue tied.” Say the dark is history. Say it’s the past. Some would say the dark’s old desires, old memories. I say it’s a movie half-remembered projected on the silver screen, ghosts silently watching. Michael Basinski’s Tub Bunny provides a light for this darkness that surrounds us. Or is it a laff in the dark?

Tub Bunny is an insatiable mind treat, an apparitional masterpiece. It revels in place and history (mostly Buffalo and surrounding areas) and the ghosts still alive there – hanging out, commenting and haunting both. With the ghosts, I sang along, participated, succumbed to belly gut laughter, got lost/found and challenged as leaping associations proliferated and multiple forms of text unfolded. The ghosts of Olson, Duncan and Blevins (alive and well) drifted in and out of my mind during the poetic roller coaster ride. Basinki’s encyclopedic talent astonishes – a creative talent that offers a poetry profoundly awake and fresh, shaking language from its doldrums into its possibilities. My ghost said: “What a wild ride!” 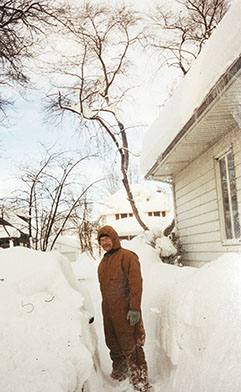 Culled from Michael Basinski’s ego sheets was the recent appearance of the monograph Salvage (2019). In 2018, he published Opems, which  documents his solo exhibition of large scale visual, sound, and performance opems (yes, o p e m s) at the Burchfield Penney Art Center. His 2017 books were Unexplained Noises, Lot Sa Nots O, and with the artist Ginny O’Brien, Combings. “Combination of the Two,” an exhibition of O’Brien’s and Basinski’s cooperative visual works/poems occurred in 2019 at the Western New York Book Arts Collaborative. In modern times his works have, by some miracle, appeared in Peach Mag, Dispatches from the Poetry Wars, Angry Old Man, Journal of Poetic Research, Volt, Jacket2, and in The Canary Island Connection–60 Contemporary American Poets. Just outside of Buffalo, New York, Michael Basinski lives just a little past the airport.