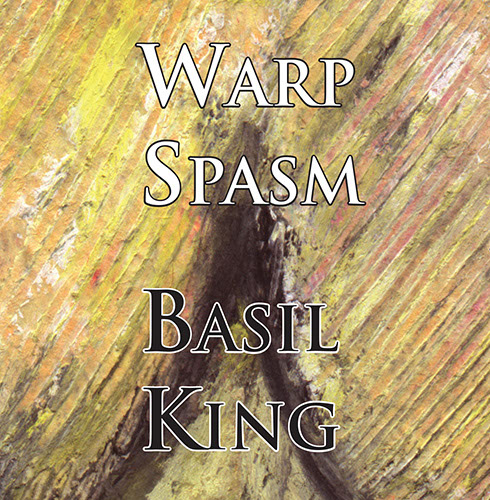 This is an extremely individual book, a book where the writer puts us through an experience whereby we can see paintings differently, read a story differently, seemingly from the writer's/painter's point of view… This is not a book to borrow, it must always be available for re-reading. As time passes my perception alters and so I must refer to Warp Spasm to help me put a few words to my perceptions, or better still, to help me watch the images change in my mind's eye. Now that is a joy.

Basil King was born in the East End of London in 1935 and came to the U.S. in 1947.  At 16, he entered Black Mountain College, where he studied painting and writing.  In 1958 he married Martha and settled in New York to paint.During this time he made art for Yugen and Kultur magazines, and for books by LeRoi Jones (Amiri Baraka), Allen Ginsberg, and others. In the early 1970s, with two partners, he founded Mulch magazine; Mulch Press subsequently published six books, including Paul Blackburn’s Piere Vidal and Allen Ginsberg’s Visions of the Great Rememberer both with art by King.

In the 1980s King painted images from playing cards, baseball, trees, and portraits of artists and poets and began writing regularly.    In 1992, he began his long documentary prose/poem/media work, Mirage. Mirage paintings, watercolors, and pastels were exhibited for the first time at Gotham Book Mart in 1994, where King also read from his texts. Since that time, King combined reading with showing slides of his own art and others. King’s visual art is in the collections of the New York Public Library, Yale  University, the

other Mirage books include The Complete Miniatures and Devotions (Stop Press, London). Both combine text and art.