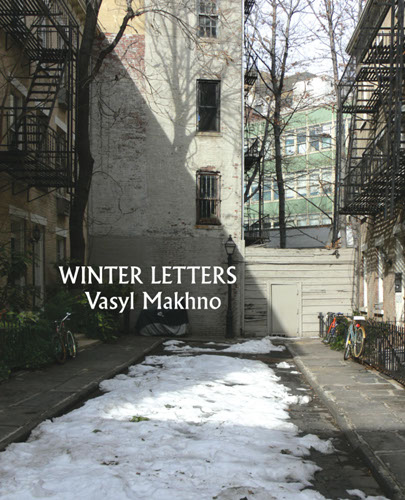 translated from the Ukrainian by Orest Popovych

Whoever loves free jazz will love these poems.  Pent-up emotion jolted to the surface of consciousness. Whoever believes in the power of language and of imagery to first stun then capture—rather than explain—reality will also love these poems. Makhno’s gift is his meticulous riffs fed by memory and imagination. Everything superfluous is cut out and concentrated into a single intensity that blows through the reader like a saxophone riff or a late-night blizzard that overtakes her/him in the wintry orchards of New York City streets.  But this new compilation of urban visionary poems is very much a partnership.  A good translator, too, must have a style of one’s own — in addition to being in love with the original text. Orest Popovych has that confidence and heart. The result:  two voices, one track. This kind of pure, sensitive, wildly in-synch collaboration is rare. Without question, Winter Letters and Other Poems is among my top recommendations for the year.

John Lennon and the author’s father hover over a landscape of legacies, offering inspiration and admonition in Winter Letters, Vasyl Makhno’s new poetry collection. Beginning with what John Donne called “both the year’s and the day’s deep midnight,” Makhno contemplates the snow and despair of an alien and alienating New York, and carries us in a seasonal cycle across time and geography, across world culture, high and low. With stops in his native Ukraine, as well as Germany, Romania, the State of Maine, among others, Makhno introduces us to characters as diverse as old Volodya (the pensioner who came to church in pajamas), and Johnny Cash (who means moola).  With a foundation in the international community of letters, Winter Letters reminds us of the universal power of art. 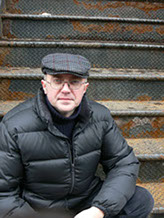 Vasyl Makhno is a Ukrainian poet, essayist, and translator. He is the author of seven collections of poetry:Skhyma (1993), Caesar’s Solitude (1994), The Book of Hills and Hours (1996), The Flipper of the Fish (2002), 38 Poems about New York and Some Other Things (2004), Cornelia Street Café: New and Selected Poems (2007), and most recently Thread and Selected New York Poems (Spuyten Duyvil, 2009). He has also published a book of essays The Gertrude Stein Memorial Cultural and Recreation Park (2006), and two plays Coney Island (2006) and Bitch/Beach Generation (2007). He has translated Zbigniew Herbert’s and Janusz Szuber’s poetry from Polish into Ukrainian, and edited an anthology of young Ukrainian poets from the 1990’s. Makhno’s poems, essays and plays have been translated into some one dozen languages. In recent years volumes of his selected poems were published in Poland, Romania and USA. In English, his poems and essays have appeared in AGNI, Absinthe, Post Road, Poetry International, Interlitq (UK), International Poetry Review and Mad Hatters’ Review. He has been living in New York since 2000.

Orest Popovych, the translator, is Professor-Emeritus at Brooklyn College of the City University of New York, and the President of the Shevchenko Scientific Society, USA. He is the author or editor of 4 books in English and one in Ukrainian. A collection of 33 of his English translations of Vasyl Makhno’s Ukrainian poetry has been published as part of their bilingual book titled “Thread and Selected New York Poems” (Spuyten Duyvil, New York, 2009), for which the translator was awarded by the American Association for Ukrainian Studies “The AAUS 2010 Prize for Best Translations from Ukrainian into English”. His individual English translations of Vasyl Makhno’s poems have appeared in  AGNI, Poetry International, Interlitq (UK), International Poetry Review and Mad Hatters’Review.