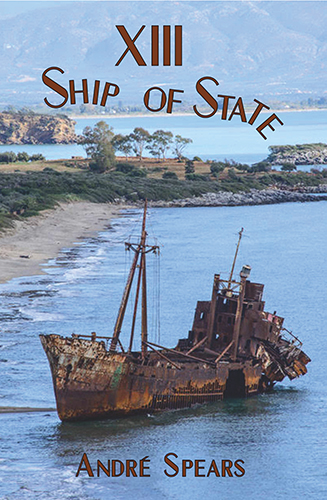 A compendium of the dreams of ‘poets’, of the indefinite, surely. Climb aboard the Ship of State, of the condition of being, of ‘transport’ – schipe, sciepe, skepi, skapr, skab, skip, skib, schap, schaft, skap, (s)kep(p). Climb aboard the Ship of State where off falls the head of the Head of State, off fall the arms, legs and penis, the labia reopening to the indefinite and definite loss. Spears is aboard, embowelled, disguised and genuine because prepared to lose his creation, to toss leeward the remote control, to maroon us all.

If this ship has found your shore, you can feed your niche hedonism, elated with the light-flares fired between the nodes of shared libraries, find warmth in the berth of fatal solidarity, or perhaps leap from its gifted plank, to search beyond the downward revolutions of the dealt deck’s fragments.

The Ship of State sets sail in astral waters off the lost land of Mu (no thing, the gate to enlightenment), haunted by the 13th Major Arcana of the Tarot deck, Death.  When the ship is marooned, captain and crew see they have resisted “joy, love and laughter,” so “[t]he hope is that by mapping/the Heavens, we will discover/the Guiding Spirit to enlighten us.” Spears knows his capers, and he names his characters accordingly: Cowabunga and Tarzan mix with the ancient and mythical, which coexist with the contemporary hashtag and psychosphere, and are shadowed through it all by the absurdities of the political. Mixing and spilling myriad and sometimes paradoxical sources and images—“between indefatigable / hope and the wise / absence of hope” (Marguerite Yourcenar)—this adventure without end, this continuation of Spears’ dazzling long poem, enthralls. Here is a seafarer who not only assimilates what is valuable, but groks what to do with it: play.

While Dr. Williams reached a point at which there would be “no one to drive the car,” this Ship of State hurtles through the noosphere manned and womaned by a truly motley crüe. But the printer is off-line and the codes for the remote control remain sealed. Equal parts Rube Goldberg and dystopic Brazil, with touches of Lovecraft, Burroughs, Ed Dorn and so much more, it is exceedingly difficult to fully describe or account for both the utter seriousness and the uproariously madcap qualities of this latest installment to the growing oeuvre of André Spears. Hilarious, terrifying, and exquisitely erudite in its metric and other exegetic manifestations, Ship of State steers poetry on a desperately needed new course. 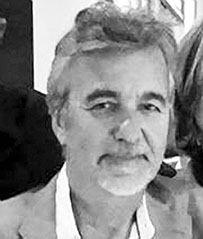 André Spears is the director of the Maud / Olson Library in Gloucester (Mass.) and a senior editor at Dispatches from the Poetry Wars.