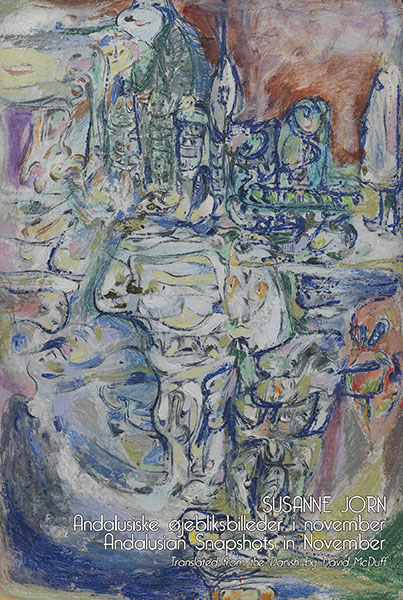 translated from the Danish by David McDuff

In 2010 Susanne Jorn published her 2nd minimalist chief work after Epigrams, the insisting matter-of-fact titled collection Andalusian Snapshots in November, which precisely is, what it is, and there’s obviously nothing else to say: It is the landscape itself, that insists on that radical simplicity.

A good fairy tale teaches you to have others in mind than oneself.

Susanne Jorn is always best, when she stylizes and minimizes.

Complete perfect pearls on a string.

Susanne Jorn is good at writing poems in to the essence of pictures, and The Bird in the Forrest with its song about colors is a stimulating journey between selected artworks at Museum Jorn.

Wordpainter one of the best lyricists of the last few decades.

Once again, Susanne Jorn has written a beautiful and rewarding poetry collection.

Situation Pictures / from The Corona War, 2022 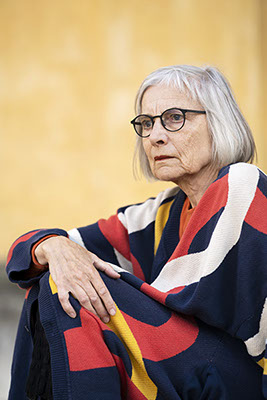 Susanne Jorn has a masters in sinology, a masters in American literature and a Comprehensives for a Ph.D. in Comparative Literature.

The same year as her debut in the Danish poetry magazine Hvedekorn (1970) and while she was in Japan on a Monbusho grant (1969-1971), Susanne’s debut poetry collection, the splinters, was released in Denmark. In 1971, she moved to the United States and has since travelled to Japan many times.

From 1970 to 1988 she used the name Susanne Lyngborg as an alias for her work as a writer and literary translator, and since 1988 she has been known by the name Susanne Jorn, starting with the publication of her fairy tale collection The Dancing Donkey.

Her work is heavily inspired by Chinese and Japanese poetry traditions and her many years in the US and Japan. The influence from visual art is significant, especially in her use of color.

Many of her books are illustrated by visual artists such as Pierre Alechinsky, Carl-Henning Pedersen, Asger Jorn, Yasse Tabuchi, Yoshio Nakajima and Gao Xingjian. Conversely, Susanne has written poems and fairy tales to the work of visual artists. The latest example of this is The Bird in the Forest from 2014, featuring 53 poems and fairy tales to the works by 26 artists from the Museum Jorn Collection.

Susanne has translated several poetry collections from the Chinese and the Japanese to Danish. The most famous are Shuntaro Tanikawa, Kazuko Shiraishi, Hanshan and Yang Lian.

After moving to Copenhagen, Denmark in 2000 and while continuing to write and translate poetry, Susanne has worked with a series of Scandinavian composers and musicians. Since 2009, she has performed live with Celtic harp player Helen Davies while reading a selection from newly published books.