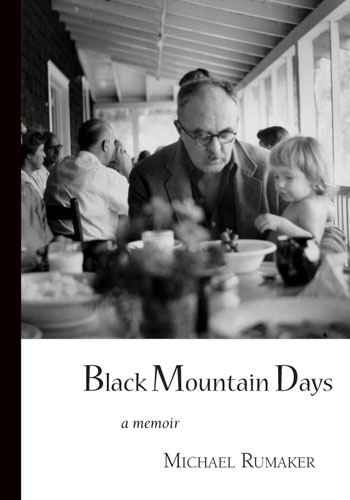 This book is terrific. The reader feels that he/she is there, living through Black Mountain’s endless difficulties in the most intimate way. A wonderful chronicle, the book to put next to Martin Duberman’s Black Mountain: An Exploration in Community.

Michael Rumaker’s finely detailed, evocative memoir puts personal flesh on Black Mountain College’s historical bones. He brings to life the daily texture of what it meant to live in that remarkable community.

Michael Rumaker seems to have forgotten nothing. The portraits of people I know myself are dead-on—Fielding Dawson, Jonathon Williams, Robert Creeley, etc. And of course, Charles Olson, the Papa Whale himself. But the historical context is there as well, brilliantly. Best of all is Rumaker’s self-portrait, indirectly presented, the best kind. A lovely (and valuable) book.

An increasingly articulate record of ‘those happy few’ who were its persons in the closing years of the college.  The poet and rector Charles Olson makes an ample and defining pivot for the meld of stories here told—of persons in displacing crisis, of elders confounded with responsibility and poverty, of the all too indifferent world surrounding this fragile company in perhaps the most decisive experiment ever to be attempted in the history of American educational enterprise.

Michael Rumaker is an American author (born March 5, 1932 in Philadelphia, PA), to Michael Joseph and Winifred Marvel Rumaker. He is a graduate of Black Mountain College (1955) and Columbia University (1970). Most of Rumaker's fiction concerns his life as a gay man. His first book, The Butterfly, is a fictionalized memoir of his brief affair with a young Yoko Ono, published before Ono became famous. His short stories, Gringos and other stories, appeared in 1967. A revised and expanded version appeared in 1991. He began to write directly about his life as a gay man in the volumes A Day and a Night at the Baths (1979) and My First Satyrnalia (1981). The novel Pagan Days (1991) is told from the perspective of an eight-year old boy struggling to understand his gay self. Black Mountain Days, a memoir of his time at Black Mountain College, has a strong autobiographical element. In addition, there are portraits of many students, faculty, and visitors (especially the poets Robert Creeley and Charles Olson) during its last years, 1952-1956.