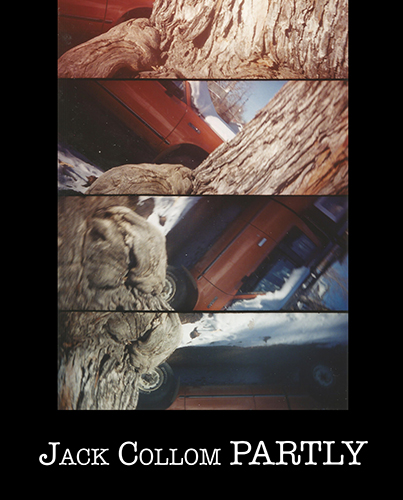 Partly is a wonderland greenhouse that Jack built and then allowed us to enter and it glows like a signal that means human beings can be great observers and creators of beauty and fun, all because of what exists. Greatest are the computer anagrams and statements that lay out some lovely mistakes.

Jack Collom and his poetry were inseparable. Both were humorously profound, and right up to the end filled with an (almost) innocent wonder at all the world has to offer. Language was his toy, his place, his way of communicating with us and with nature.

Lucy R. Lippard, author of Undermining: A Wild Ride Through Land Use, Politics and Art in the Changing West

Jack Collom wrote with a wider range and bigger heart than any other North American poet of the past 100 years. His books are field guides to everything that makes you love poetry. Partly is like a great day’s scramble through bramble bushes, bogs, over boulders, under trees, into the world of birds, vernacular speech, posters of snow leopards, moss, lichen, watch out for that cactus! It is fun and rough & tumble. I’d rather spend a day with a Jack Collom book than in the Library of Congress.

Jack Collom lived a life of poetry as few ever do or could—not just sharp and freshly-moving poems, but a heart of compassion and quiet jest;  constant open eye and spirit for the youngest and oldest beings who crossed his path.  Jack was the very meaning of "soul".  His legacy is more than just writings and teachings, it's a whole life.  It will grow.

Gary Snyder, author of The Great Clod: Notes and Memories on the Natural History of China and Japan

Jack Collom’s poetic ethos is resoundingly affirmative. In a word? Everything. In poetry, Collom found a resource that couldn’t be extinguished—“made of meaning and unmeaning,” and seeded with “embryo specks of beauty and kindness.” No harmony, no dissonance, no particular, no universal, no absurdity, and neither and tenderness need be—could ever be!—excluded from his exploration. (As he writes in the forward to this book, “Noticed I was discovering (not simply recording) what I knew.”) To read these poems is to understand that poetry is breath which becomes the lung, breathing through and with it. How fortunate that we can respire and inspire with Jack Collom, for here is a poet who had the humility to know that absolutely nothing was beneath his attention and the genius to track poetry’s wonder into endlessness.

Elizabeth Robinson, author of On Ghosts and Rumor

Partly, Jack Collom's last personally selected poems written over many decades, is a rambling trove of his left-hand poetics of the ordinary and the fanciful, the quick and the careful. If ordinary and fanciful, care and quickness seem contradictory, they are not in these poems (and graphics) where they are made and arrive in the same gesture. This is what I have always loved in Jack's poetry, the warmth of personal feeling in the spontaneous take and movability of context allowed for the words chosen, or lines drawn. Little concern for direction and finish-line, these poems are made from his momentary love of this act.

In Jack Collom’s final manuscript, Partly, we see the early and last fruits of a great poet who uses the page as a canvas to explore and invent the open field of language. For Collom, “Poetry is the nervous system’s nervous system,” a felicitous marriage of brain and body. His project remains true to the enactment of experimentation for many decades, formal in the best sense, a poet who plays with and constructs every imaginable form—often embedding handmade images and color to collage a single word--ekphrastic, elastic, acrostic, calligramatic. Seriously goofy and erudite, Collom’s work is a poetic treasure hunt to a place and notion called Paradox where “there’s a tiny gap/that leads to Paradise.” And in this paradise, Jack Collom’s poetry is a divine witness to place, bird, animal, and the entire natural world.

Spanning from 1954 to close to now, this final manuscript is yet just a tantalizing taste of Jack Collom’s astonishingly and magnificently various lifetime oeuvre. Few equal Jack’s passionate investigation of form, from sonnets to acrostics to concrete poems to new forms invented uniquely for whatever he was discovering that moment. Each poem seems to insist that the reader be included in its writing, and collaborations especially point to Jack’s inclusiveness—of the people around him, of all vocabulary, of nature’s unknown wildness, of the pigeons as well as the warblers. May his expansive spirit continue to inspire us!

Marcella Durand, author of Rays of the Shadow

Partly is a mischievously dizzying Selected, a taste of a treasured legacy that eco-poet and master writing teacher Jack Collom edited before he died. We have in hand rambling, gritty, soaring instances of his practices:  calligrammes, acrostics, anagrams, drawings, collaborations with students and friends, and perky sonnets with ear to Shakespeare. Collom always had an infectious metabolism with poetry; it was vibratory in him and words rose naturally, nothing too precious or elevated for the construct at hand. He was in the lineage of WC Williams and Gertrude Stein and the innovators of the New American Poetry and a major poet of the community of the Jack Kerouac School at Naropa where he famously taught and made one think and write and care about the world: its words, its kinetics of the human and other remarkable celestial and earthy kin for many years.  "Here’s mud in the eye! The angle doesn't matter,/Turn & stagger upward, mad as a hatter”.

Jack Collom realized that it’s a Long Long Sacred Haul, from what they call juvenilia to the full blown lines of a poet’s “acme,” and then the Final Flow.  He was indeed on a Sacred Trail.  His good will, his profound sense of humor, and his utmost concern for the apt Survival of Humankind and all Plants and Animals, shine forth in his work.  Jack’s worth slowing down for, and worth the expending of daily study and pondering.  In his remarkable history

traced in his poetry, he lives on and on and on.

Jack Collom was a great inventor, whose goal was to destabilize the world of poetry, and cut through all the repressive forces to make something fresh, instantly renewable, and true to life. Every poem was like a new morning, a fresh take, as if seen through the eyes of a child, as if a measure of caprice was the magic light which gives life meaning. His total work is intrepid, incorrigible, and spills over the side of the page, with an endless rigor, an intelligence, and an intuitive sense of when to stop and  go on. All the splendor in the grass is right here.

Lewis Warsh, author of Out of the Question

Toward the end of the short prefatory comment that Jack Collom wrote for this collection, he wrote, “Variety is the basic fact.” Certainly, as the works that comprise Partly make clear, this remark speaks directly to Jack’s poetry: formal variety, thematic variety, variations on the iamb or other ruling metric unit, and sometimes elements so various on a page as to push plenitude toward gorgeous messiness: the rush of ungovernable life. And, ultimately, it is of life that the observation “Variety is the basic fact” speaks. No poet ever has been so delighted by life and generous in the living of his own. Partly is Jack Collom’s parting gift to life, a work of sheer affirmation carried out over a lifetime of intellectual and linguistic vivacity. It is a masterpiece of happiness, ever seriously but mischievously at play with happenstance. Thank you, Jack.

Lyn Hejinian, author of The Book of a Thousand Eyes

When Jack was alive, he was my favorite living poet—although I was unable really to separate my love of his work from my love of him. Now that he's died, he joins my personal pantheon, including the usual suspects and Jubilee saints. Do they yodel in Heaven?

And Jack, Jack wrote on his hand every day,

of high note as we walked, all that way

with sunflowers in it, swallows

up and out one by one to cloverleaf

and stamp the very fact of flight,

the emerald polar-green it's always been

in glints and shimmers, now the rose-rare violet—

Collom’s work avoids the Romantic "pitfall" of reifying the division between nature and the intellect, by bringing together unlikely tonal combinations, particularly the playful and the serious. 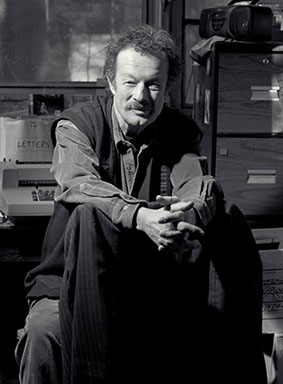 Jack Collom (1931-2017) was a prolific poet, an adjunct professor and Outreach director of Naropa University’s Jack Kerouac School of Disembodied Poetics, where, in 1989, he pioneered Eco-Lit, regarded as the first ecology literature course in the United States.  His avid interest in science and nature informed much of his work, notably in books like IBC & Blue Heron, What a Strange Way of Being Dead, Arguing with Something Plato Said, Red Car Goes By, Exchanges of Earth and Sky, The Task, and Second Nature, which won the 2013 Colorado Book Award. His writings and essays about the environment were published in, among many others, ecopoetics, The Alphabet of the Trees: A Guide to Writing Nature Poetry, and ISLE, the journal of the American Society for Literature and the Environment.  He was a devoted collaborator, publishing works with other poets such as Reed Bye, Elizabeth Robinson and Lyn Hejinian.  In the mid-1970s he began teaching in poets-in-the-schools programs, a practice he continued for the rest of his life. Teachers and Writers Collaborative published his books about teaching:  Moving Windows: Evaluating the Poetry Children Write, the influential Poetry Everywhere: Teaching Poetry Writing in School and in the Community (with Sheryl Noethe), and an edited volume, A Slow Flash of Light: An Anthology of Poems about Poetry.  He was a great advocate for teaching poetry beyond the conventional classroom: in prisons, senior centers, halfway houses, wildlife refuges, and other less usual contexts. He read and taught throughout the United States, and in Latin American and Europe, and received numerous grants and awards, including two National Endowment for the Arts Poetry Fellowships and the Foundation for Contemporary Arts. One of his favorite children’s poems was by a wise sixth-grader, who wrote: “In our wildest dreams/Our days are numbered.”