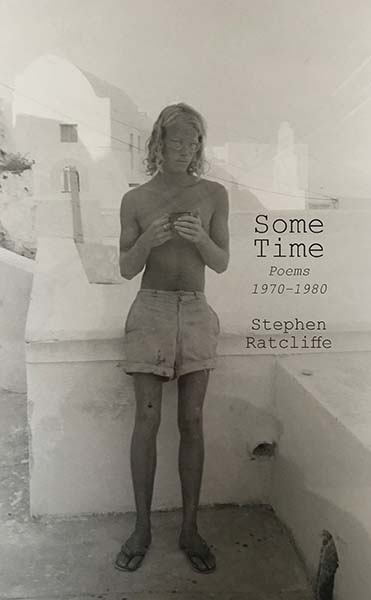 In Lines reflecting a “reading” of Mallarme’s prose poems—a form of surrender, of seduction, of imperilment—Ratcliffe survives the risk. His poetics flourish in this dual atmosphere. They are rinsed with a surprising glow in the valiant process of relieving the Mallarmean tension, while maintaining his own arena of sensitivity.

How frequent it is that we desire to wear a robe of silken strings, that adorns us as if we were kings. Stephen Ratcliffe successfully transcribes in poetry, both restive and active, the fact of things both Human and Natural

Ratcliffe’s answer to Basho, Rocks and More Rocks travel along an axis of spontaneity and formal restraint, distance and intimacy, where natural landscape becomes a landscape of the mind. It is poetry as practice, a moving meditation, that form of presence – continuous/as moments.

This year and a half of the poet's life reads like an inspired and perceptive documentary. Daily pieces are comprised of stage directions in which action, color, figures and objects emerge and disappear in the cinematic framing of a subtle drama. Inst4ude5ions on what to view in a beautifully spare but concise and timeless world.

Written as a daily practice from March of 2000 to July of 2001, REAL has a meditative intensity as it gives both the spectacular and the ordinary moments of daily life an equal attention. This is a deep, long poem, not for those addicted to the surface pleasures of the quick cut. Each section is seventeen lines and certain themes return again and again – the ocean, relations between men and women, small animals such as cats and owls, lemon yellow and various blues. This structure frames and supports the poem's celebration of intimacy with both the natural and the human world and its quiet, patient attentiveness to how luminous it all can be to those who just sit still and notice.

A note on my early work

In looking back over these early poems (written between 1970 and 1980, from “Waterfall” to “T h e r e”) certain things come to mind as being formative to my work from that time onward. Attention to the syllable, word and line for one thing — writing poems a matter of placing words next to each other in lines, one word beside another, the word in the middle between the one before it and the one after it.  Words also made of letters giving visual shape to lines on the page (seen by the reader when read by the eye), the acoustic shape of words in the air (heard by the listener when read aloud).  Words also compressed (“Dichten equals condensare” as Pound said, chiseling the poem out of stone so to speak — all the possible words out there, only these words making the poem, which in my writing of these poems sometimes went through many drafts (as seen in notebooks) and sometimes came right out as the “finished” made thing (“The poem . . . a small or large machine made of words” as Williams said).

Paying attention to the sound and shape of words in the opening lines of “The Eagle’s Song” for instance, one counts syllables – “The sun’s ray [3] / lies in my wings [4] / before dawn [3]” in the first stanza is echoed in the last one – “the dark earth [1] / falls in the sky [2] / at sun down [3]” (with a variation in the second stanza — “my shadow turns [4] / thinned as I lift [4] / at high noon”) and the repetition with variation in the 4th lines of each stanza — “O in my wings / O as I shift / O in my eye.”  Likewise in “Pause, Pico Blanco,” the presence of the four-syllable line (made up of one-syllable words and six two-syllable words — “Pico Blanco,” “mountain,” “into,” “open spaces” — all of them accented on the first syllable, the “falling rhythm” of a “trochaic foot”).  Attention to the weight/duration of syllables making up the measure (length) of the line in relation to those around it —all of these poems handwritten in notebooks and typed on the typewriter, fingers hitting the keys, letters striking paper rolled on the platen.

Attention also to sound of syllables and words in that poem – dipthong ou in “mountain,” “brown” and “bounds”; long o in “Pico Blanco,” “open,” “bone” and “so”; short-i in “in,” “into,” “in,” “its” and “is”; long a in “spaces” and “places.”  Attention to things like sound and placement of words in lines sharpened by my work on Thomas Campion (contemporary of Shakespeare, the only poet of his time to write both the words AND music of his songs) tuned my ear to what’s taking place in the poem — visual shape of words on the page, acoustic shape of words in air — Campion’s “silent music” until read aloud (or heard in the mind’s ear) at which point the poem’s visual shape also takes on an acoustic shape, becomes words “sounding the air” (as in “Waterfall”) — Pound first and then Creeley pointing the way back to Campion, in whose songs (words + music) one sees the possibilities of the “principle of rhyme” — how rhyme-like identities pull simultaneously together and apart.

Attention also to the possibilities of the serial poem, short pieces put together by shared visual shape, sound, subject matter and so on. “The Eagle’s Song” for example — three seven-line poems whose lines mirror and echo one another in a multitude of different ways at once.

I give you these —

where the arrangement of words in lines calls attention to the sound, weight, duration and accent of syllables (accent on the first syllable of two-syllable words [“Angels,” “sunlight” “over,” “flowers,” “shadow begin,” “lilac lilies”] and the one three-syllable word [“meadowland”]; equal weighting of monosyllables in “I give you these”), and where the constraint of counting in syllables and words in lines works to give the poem its visual shape on the page, acoustic shape in the air —

Also in another way how the compression of shaped lines in poems (typed on a Smith-Corona typewriter in Pica or Elite font, now the equivalent spacing of Courier on the computer) makes for the possibility of right as well as left justified margin, as in

which also gets registered as sound in the air for the listener who hears it read aloud (but who won’t see the shape of those lines — likewise in “Still Life,” where the reader sees what a listener also hears but doesn’t see, how the interior lines get increasingly longer then shorter, giving the right margin its kind of triangular shape).  So also in “Star Route Farm Journal,” one poem followed by the next (from “Milking” to “Peas” to “Potatoes”) as the subject matter shifts, and also in “T h e r e,” where words are cut loose as objects floating on the page — line minimal, white space, people talking, time stopped at this moment, the fact of things in (and also as) words —

[“which I’ve done much of,” as Creeley once noted in a letter to me — Creeley again being an influence on these early poems, as was Campion and Pound, who first steered me toward him] 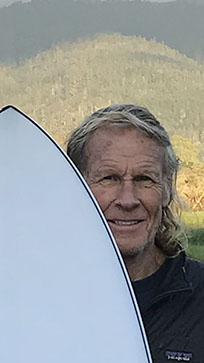 Stephen Ratcliffe is the author of more than twenty books of poetry, including most recently Rocks and More Rocks (Cuneiform 2020), sound of wave in channel (BlazeVOX [books], 2018), Painting (Chax Press, 2014) and Selected Days (Counterpath, 2012) which won the San Francisco State Poetry Center Book Award.  He has also written three books of literary criticism, Reading the Unseen: (Offstage) Hamlet (Counterpath, 2010), Listening to Reading (SUNY Press, 2000), and Campion: On Song (Routledge & Kegan Paul, 1981). Publisher of Avenue B books and Emeritus Professor at Mills College, he has lived in Bolinas California since 1973.