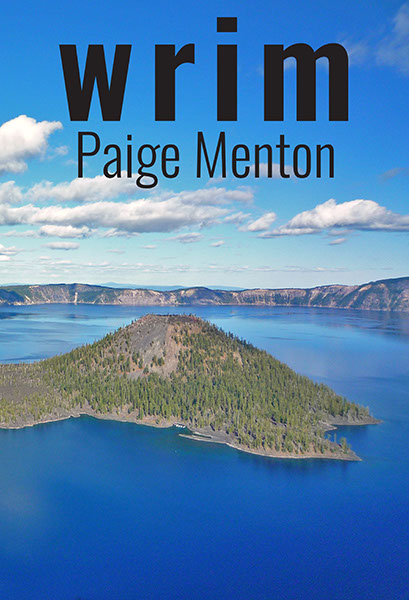 A mixture of Socratic method and Zen koan, Wrim’s erasure poetics models the participatory learning essential to national and global health. Early in the book, a speaker-narrator asks, “Is the life additive or a scraping away?” This consideration guides Wrim’s many invitations to rethink everyday relationships, particularly the self’s awareness of personal history—events and actions indexing character, as well as assumptions so deep they take constant effort to know. In Wrim’s long stretches of inquiry, Menton demonstrates that even tiny perspectival adjustments could alter the world. Wondering, “Is the story a Tinker Bell to the main character’s Peter Pan?” Wrim urges readers to abandon conventional thinking about relationships among literary structures, the environment, and storytelling in order to solve overwhelming problems like climate change and ineffectual political systems. But Wrim’s confidence in imaginative intelligence is accompanied by friendly counsel: its questioning voices admonish us not just to change our thinking but to observe the natural world’s plants and animals for instruction:  “They may signal other intentions, new strategies for survival that we might employ. We may notice them more and more in the hopes of our shared survival.” That survival, Wrim teaches, requires both creating and “scraping away” stories of how to be.

What happens to the story when the world of the story is under attack? As trees are felled and pollinators disappear, Paige Menton painstakingly erases narrative, opening up spaces of possibility to find that “the beauty remains.” We can no longer speak the world that was; instead, in lines that inhabit the full emptiness of the page, Menton uncovers what stories may still be possible. A beautiful and haunting book that reveals the subtle ways we might speak our own ecology.

Paige Menton lives outside of Philadelphia where she runs a land restoration organization called Journeywork and cares for the land of a Quaker meeting. She grew up in Birmingham, Alabama. Her chapbook Twenty Miles to April was published in 2021 by Dancing Girl Press.